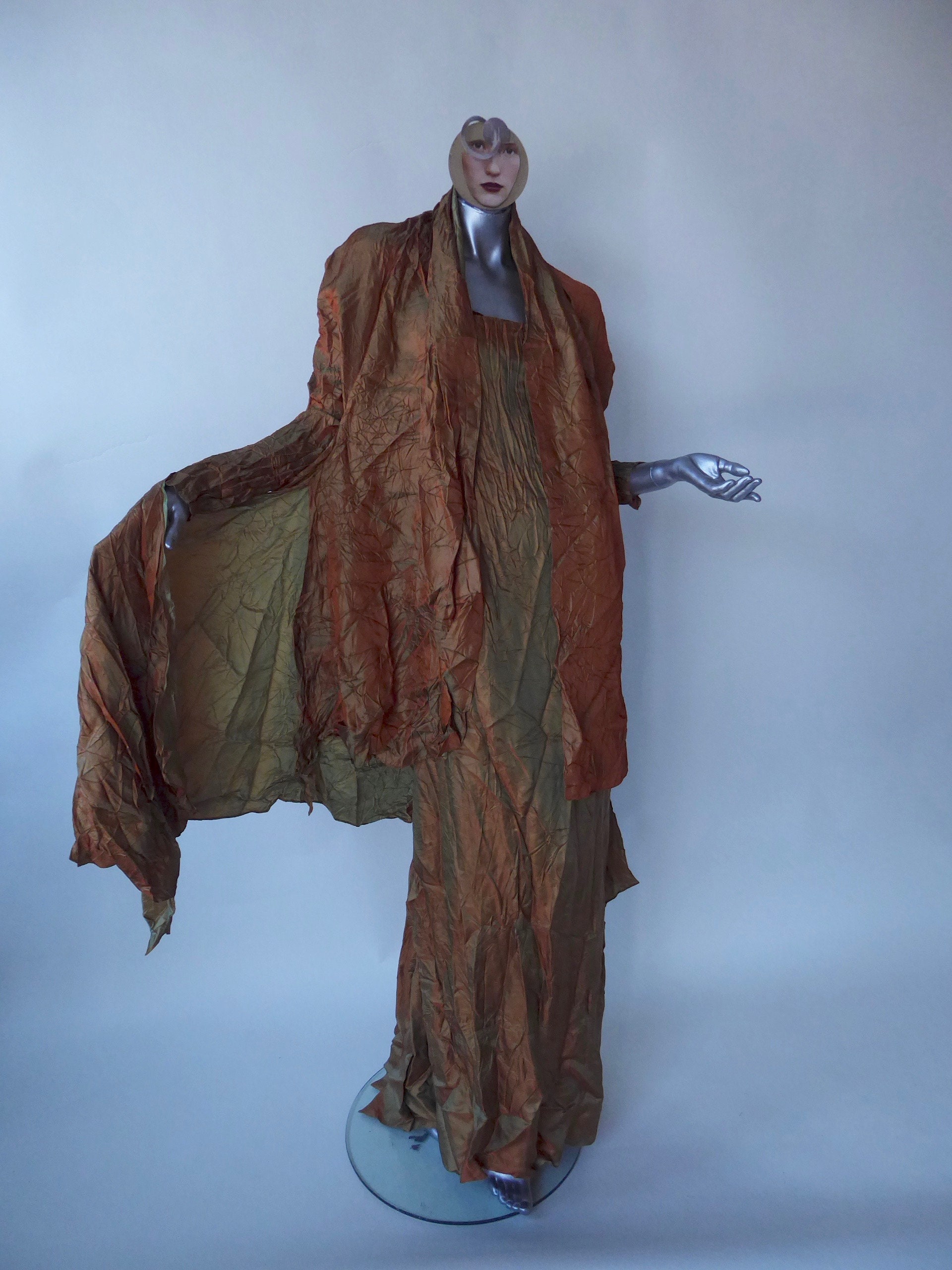 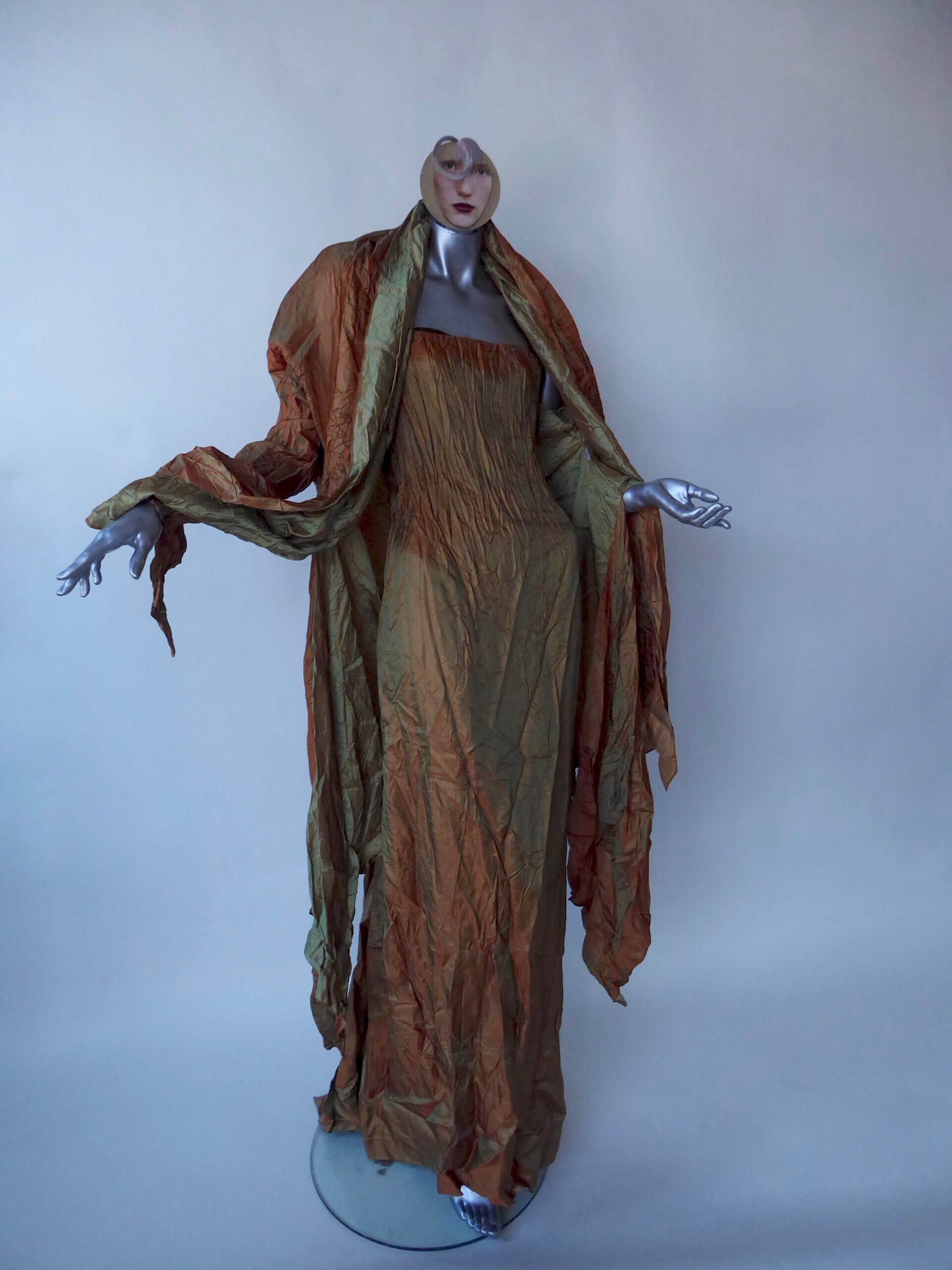 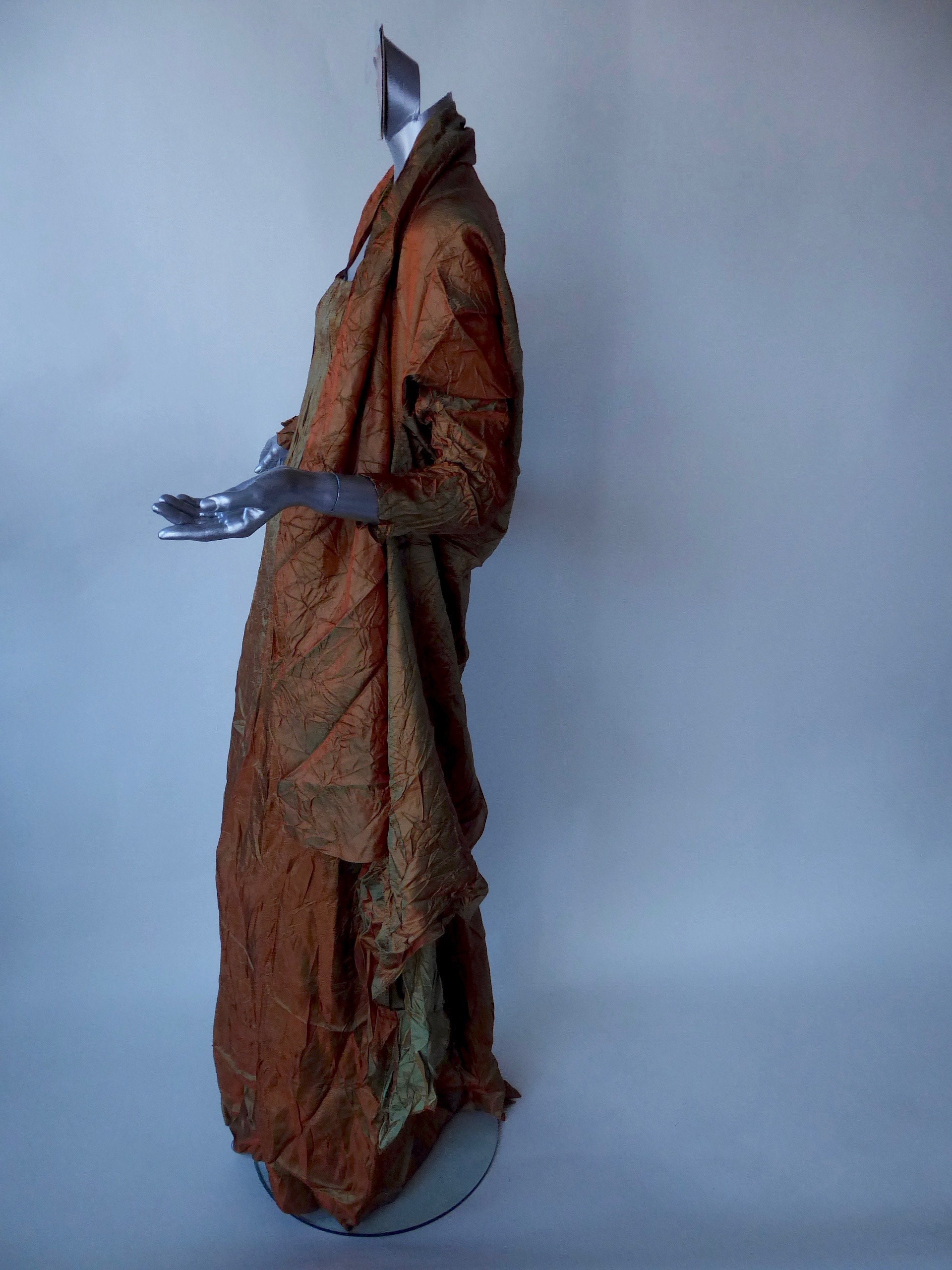 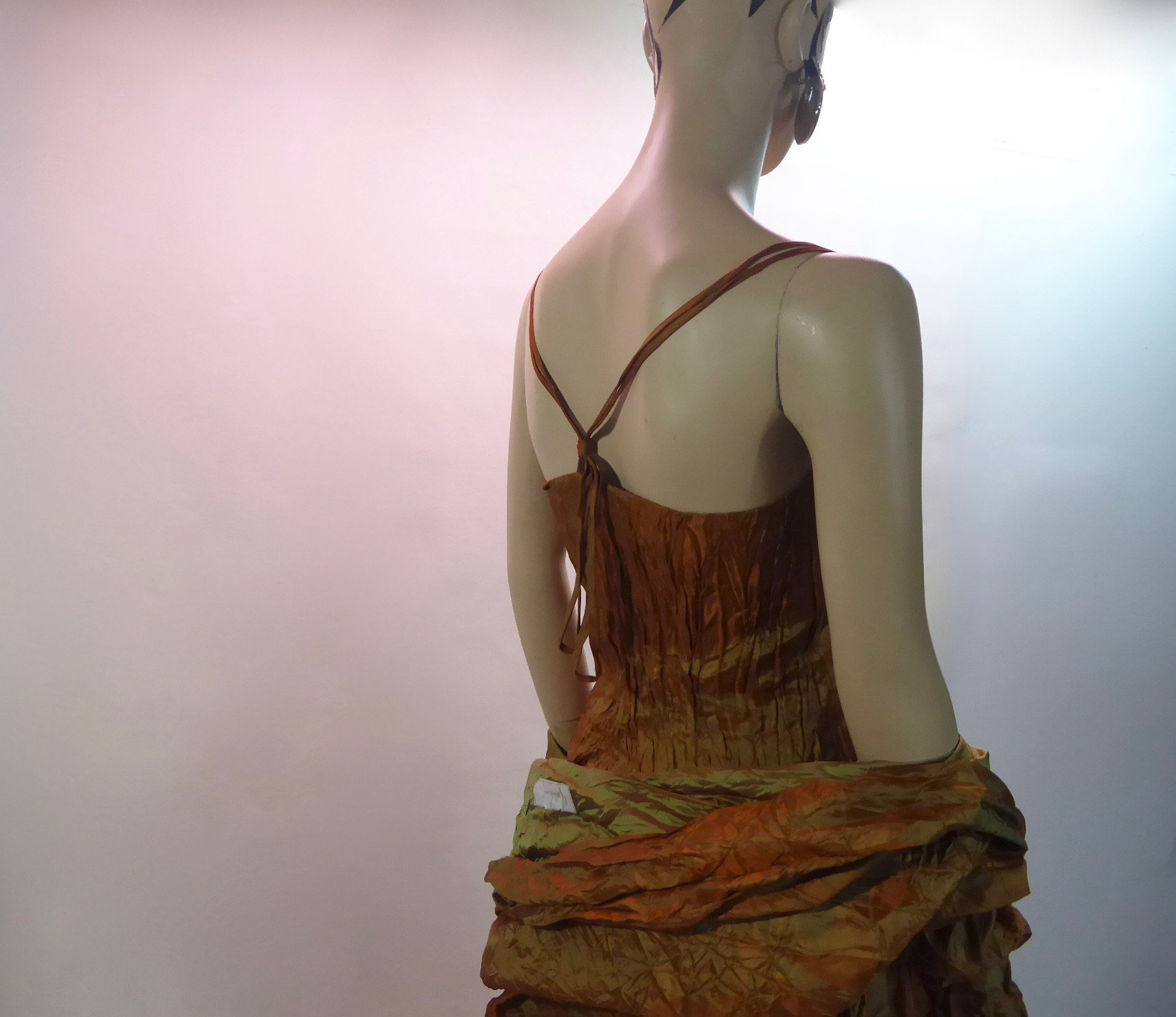 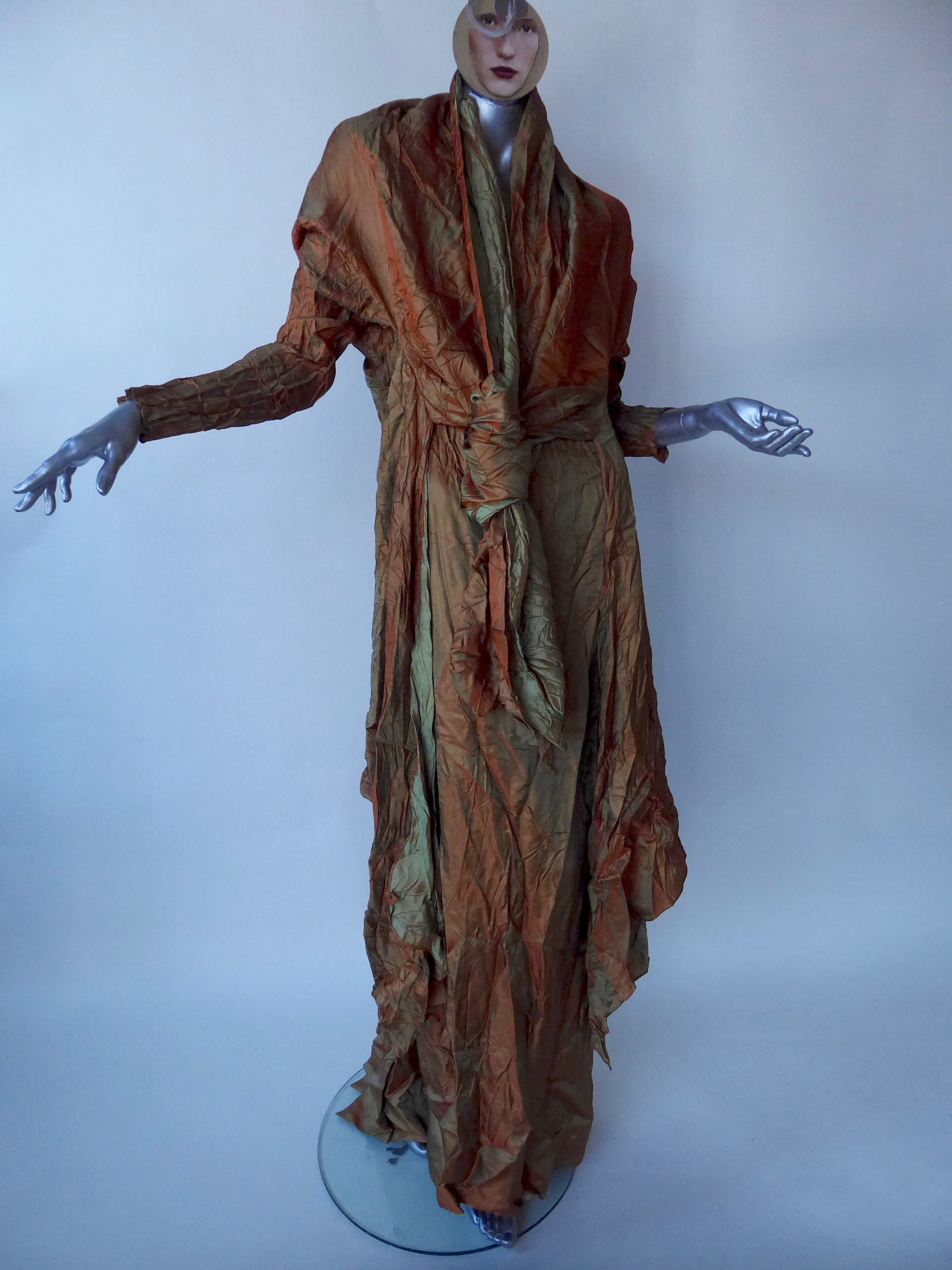 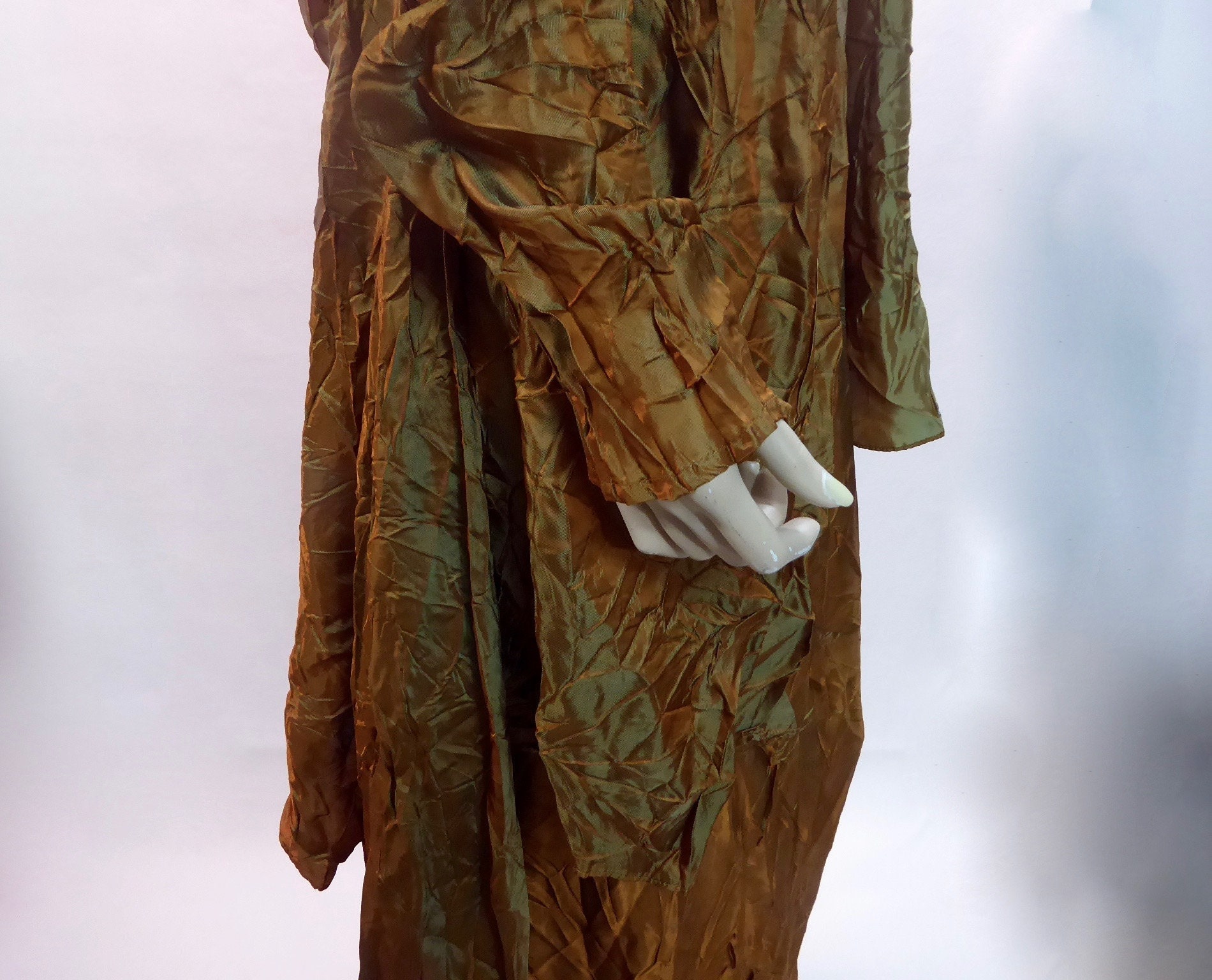 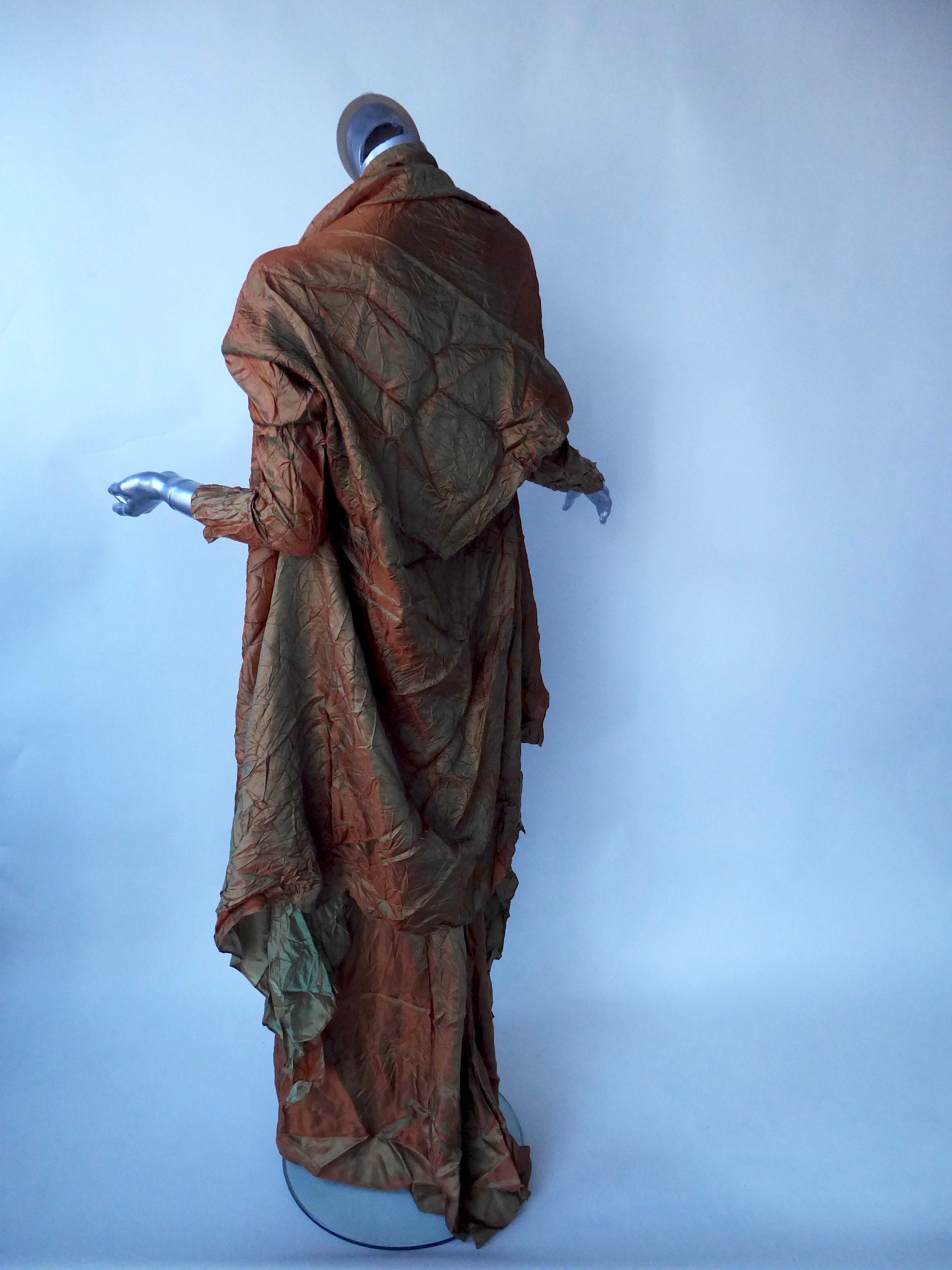 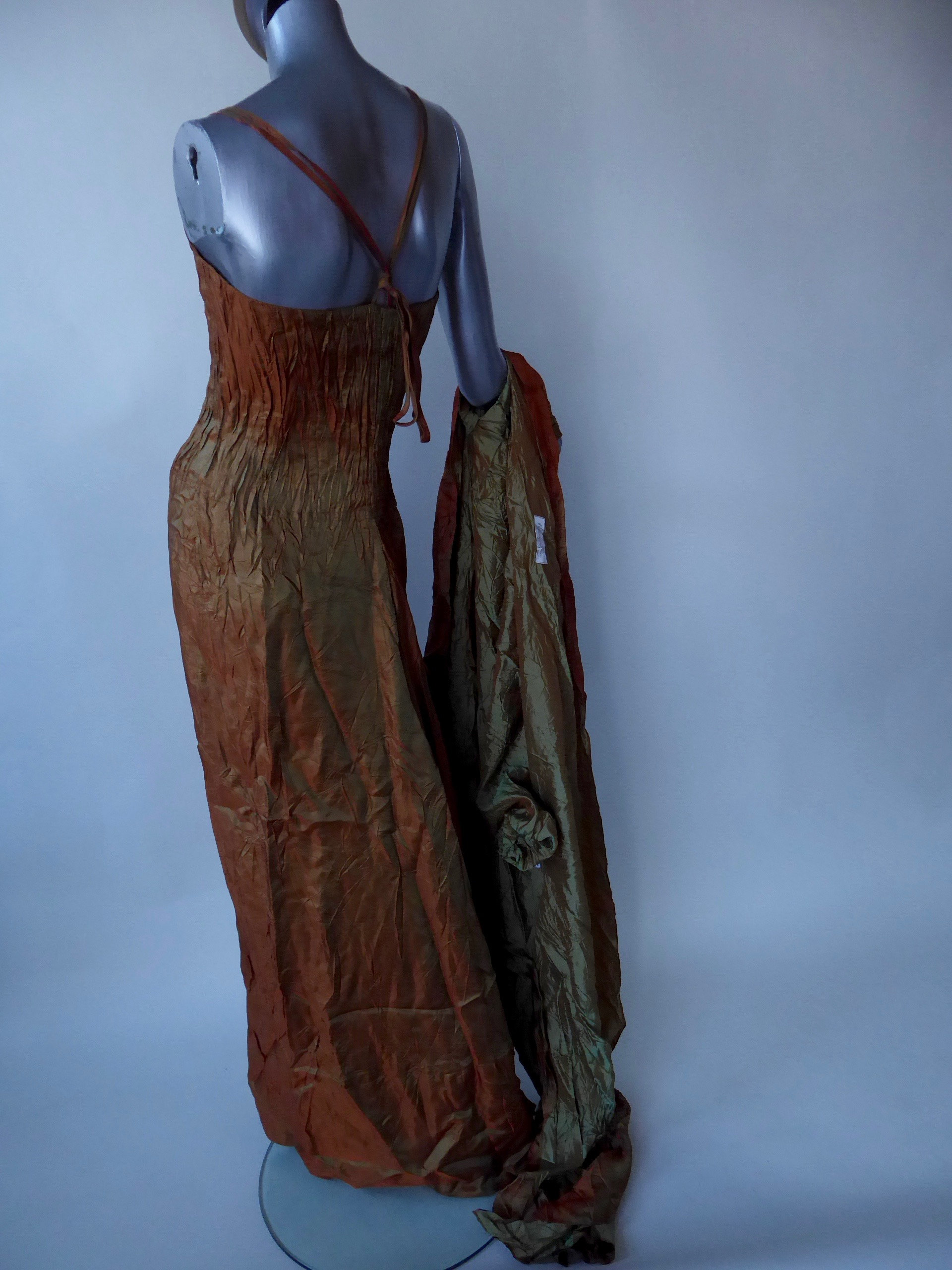 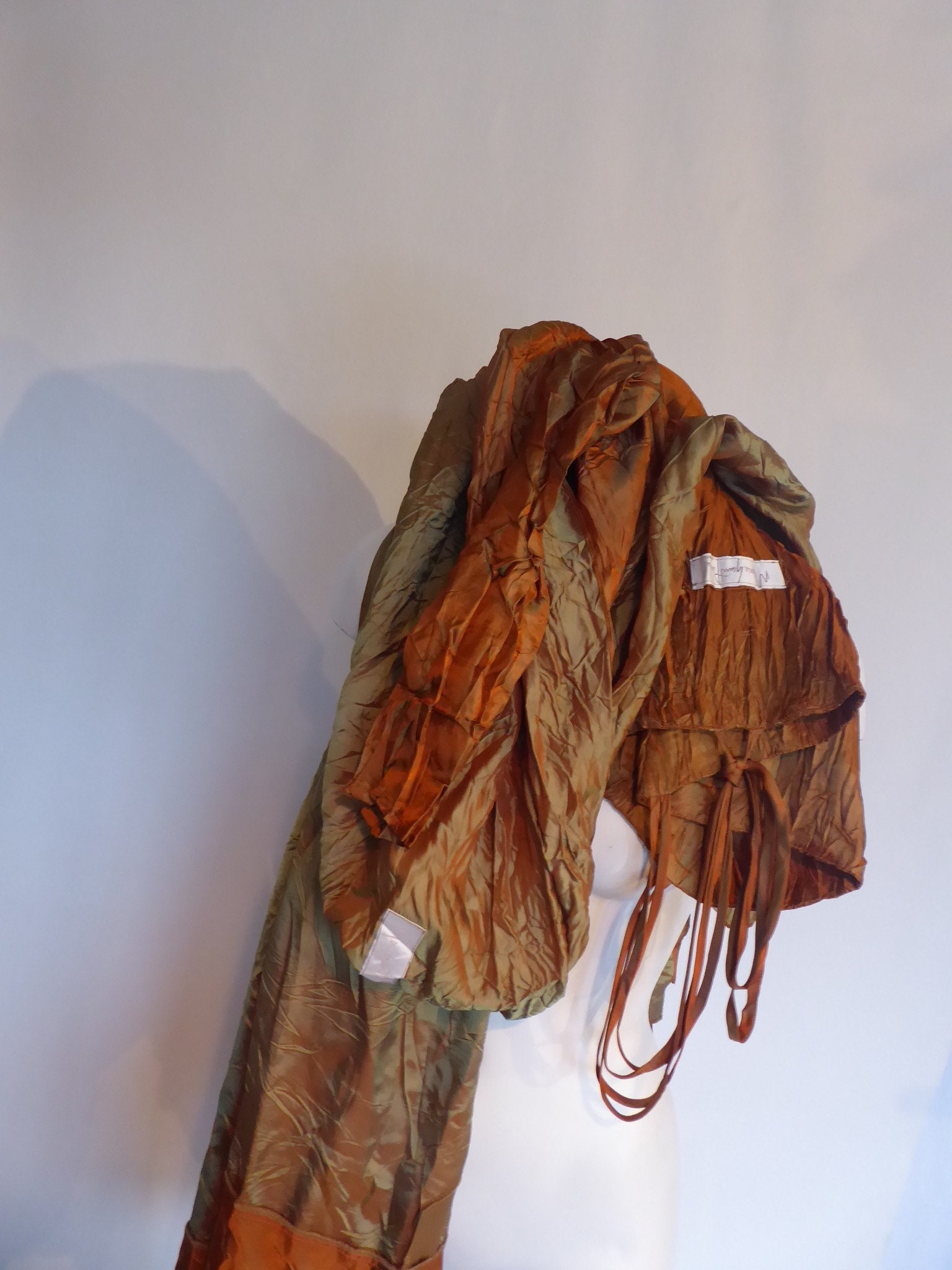 Ensemble Marie Saint-Pierre, couture designer. Long dress and jacket in shades of gold and copper shades.
Long sleeveless dress with straight tube bodice with 2 thin double spaghetti straps and long dolman sleeve jacket.
The finesse of the assembly and the choice of crumpled fabric that fits like a tube gives an elegant, modern and timeless whole.
The 100% acetate crumpled fabric is soft and lightweight and is indicated as a one-size-fits-all size.

Here are articles drawn online that describe well the style and history of this prolific and talented Quebec designer.
"Marie Saint Pierre, Montreal fashion designer known for her high-end women's ready-to-wear combining luxury, functionality and performance. Inspired by architecture, she designs minimalist silhouettes with unexpected volumes, cut from technical materials."
Le froissé (1995)
She opened her first boutique-workshop on Saint-Denis Street in Montreal. It is there that she imagines the famous crumpled fabric that will become her signature for many seasons.
"The fabric orders made at the Salon Première Vision in Paris never arrived at Marie Saint Pierre's workshop and, two weeks before the presentation in Toronto of the fall-winter 1995-1996 collection and that of the Paris fashion shows, Marie Saint Pierre had to find a solution. It is in the rue Saint-Hubert that she will buy "silk taffeta" and "boiled wool". It will immerse some fabrics in salt water and, as it dries, the fabric will wrinkle. The challenge will be to permanently fix this crumpled effect. "I worked on my creativity!"
The queen of crumpled draws on the eras to create a timeless style that pushes back the barriers of functionality. His label: a new aesthetic that is both nostalgic and resolutely modern.
His fetish materials, boiled wool, mesh, lace and crumpled taffeta, make nods to the past while wanting to be avant-garde in their treatment. "I don't cling to fashions. I have anchors in the past, present and future," says the designer.
His sense of line and destructure is reminiscent of that of Japanese designers.
"My clients are not victims of fashion. They are committed women. They can be found in concert halls, as well as in benefit evenings. They have both their feet in the arts and a social conscience."

Marie Saint Pierre received numerous awards, including an honorary scholarship from the Montreal Fashion Group (1986), the Woolmark Canada Award (1990) and the Vidal Sassoon Award for Designer of the Year Chosen by Buyers - Toronto, Ready-to-Wear (1995). In 2002, the Montreal Chamber of Commerce also named her a Rare Pearl for her involvement in the community, and in 2006, the YMCA awarded her the Woman of Distinction Award for her initiative in Quebec. In 2009, she was named a knight of the ORDRE NATIONAL DU QUÉBEC, which recognizes her positive influence in the province.
She was the first fashion designer admitted to the Royal Canadian Academy of Arts in 2017.


If you have any questions, don't hesitate.